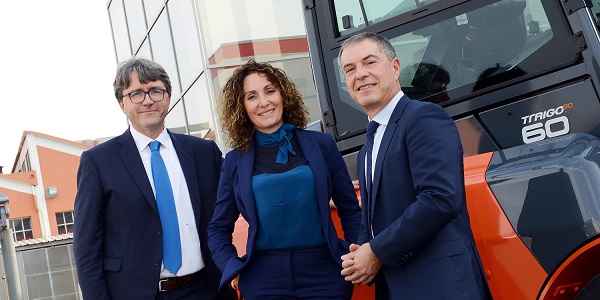 The digital transformation of the long-established forklift factory, acquired by the Japanese giant in 2000, called for total rewriting of the ERP/MRP platform to further boost productivity and quality. With an Italian style admired by the entire Toyota Industries Corporation.

An aspect of which TMHMI and Sinfo One are particularly proud is the natural and effective way in which the MRP system of TMHMI was shaped to meet the peculiar needs of the KANBAN and Junjo message regulating the delicate mechanism of deliveries that arrive from the outside directly to the assembly lines. The production line that the Japanese of Toyota have designed to achieve a “continuously improving factory”, is based on a just-in-time system. There are no pauses for procurement of the parts to be assembled, nor hold areas where these parts can be kept.

“Greater harmonization in our information systems – specifies Patrick Malservisi IS/IT Director di Toyota Material Handling Europe Supply – allows us to do better work in the direction of service objectives. Digitization can be a good lever to introduce new concepts such as Agile and other approaches”

The impact of the new platform implemented by Toyota is also in the direction of smarter and automatic planning and of a production system that can better adapt to errors. «We have already had tangible results in this sense, with a reduction of the people involved in daily planning » – explains the CEO of TMHMI. «Obviously, our goal is to redeploy these resources to higher-value duties». Fewer people, fewer paper documents, optimized processes, increased resilience in case of errors: in practice, the mantra of digital transformation.

Even more surprising is the method used by Toyota Material Handling Manufacturing to implement all of the above. In its peak phases, the project involved around 20 experts from Sinfo One and about 40 key users at the Bologna plant. On average, 20 to maximum 25 key users worked during the various implementation stages. The “big bang” formula was chosen for the go-live: on the set date the old system was shut down and the JD Edwards Enterprise One was switched on. Today, out of the 570 people working for TMHMI approximately one third – counting white collars and technical staff – have access to the new ERP.